Complete visibility into your Microsoft assets

Over the last few months, runZero has added support for Microsoft Azure cloud assets, Azure Active Directory and on-premise Active Directory users, groups, and assets, in addition to a community integration with Microsoft Sentinel. The runZero 3.2 release fills in the missing pieces by bringing endpoint visibility into the runZero inventory through new integrations with Microsoft 365 Defender and Microsoft Intune. runZero Enterprise users can view, search, analyze, export, and alert on attributes from the Defender and Intune metadata.

Mobile device management (MDM) solutions have become essential to organizations with a remote or transient workforce because of their ability to manage and secure devices even when they aren’t on the corporate network. Similarly, endpoint detection and response (EDR) platforms are commonly used on all sorts of assets for security monitoring and automatic response. While these IT management and security tools are an important part of many security stacks, reviewing what has been onboarded to those sorts of solutions only tells you about the devices that someone is already responsible for. Those lists can’t tell you about all the assets on your network that are unprotected or unmanaged, or all the assets disconnected from your network that haven’t been scanned.

Unprotected and unmanaged devices are the bane of many organizations, and runZero can help you find them. Quickly identify unmanaged assets through a runZero query: filtering on source:runzero AND NOT (source:ms365defender OR source:intune) will return a list of assets that were found by your Explorers, but are not registered onboarded to Defender or Intune.

The inverse of this query can be used to ensure off-network assets are included in your asset inventory: (source:ms365defender OR source:intune) AND NOT source:runzero. This will give you a list of targets that may be missing from your scans and can ensure you’re gathering all the available network and asset data.

With runZero’s unmatched active network scanning and an ever-growing list of integrations, you’ll have a complete asset inventory at your fingertips. To get started, set up a connection to Microsoft 365 Defender or Microsoft Intune.

Query and alert on Active Directory users and groups

In addition to running searches in the Users and Groups inventories, runZero Enterprise users can leverage the Azure AD or Microsoft Active Directory integrations to quickly find accounts that match specific parameters. Quickly identify expired, disabled, or locked accounts, as well as managed service accounts and accounts with non-expiring passwords. These queries are included in the Query Library and can also be used to create alerts.

The Organization Overview report has also been updated to include counts of users and groups for the whole organization as well as per site.

Run queries about AD users or create an alert rule to find accounts of interest.

runZero includes fingerprints for the metadata returned by the Microsoft integrations. This leads to more accurate operating system and hardware data within the runZero inventory. These fingerprints cover every aspect of the Microsoft ecosystem, from Azure cloud VMs to off-network endpoints running Microsoft Defender.

The 3.2 release includes several changes to the user interface to improve the performance of the runZero console, as well as a change to how page navigation transitions happen. As a result, the pages will load faster as you move between sections like the inventories and asset details pages. Additionally, the asset details page provides better performance and efficiency when loading all of the details for an asset.

Enhancements have also been added to make using the data easier than ever. On the asset details pages, the “last loaded” timestamp indicates when the asset details were loaded, and a refresh button has been added to be able to quickly reload the data without refreshing the whole webpage. The Vulnerabilities and Software tables on these pages now perform and load faster. Additionally, the navigation list for the Services table now displays the protocols and ports as a navigation tree to make finding the information you’re looking for simpler and a button has been added to quickly bring you back to the top of the page from the services table. As we continue to make progress on the architectural modernization of the runZero Console, you will see improvements to the performance and user experience of the product. 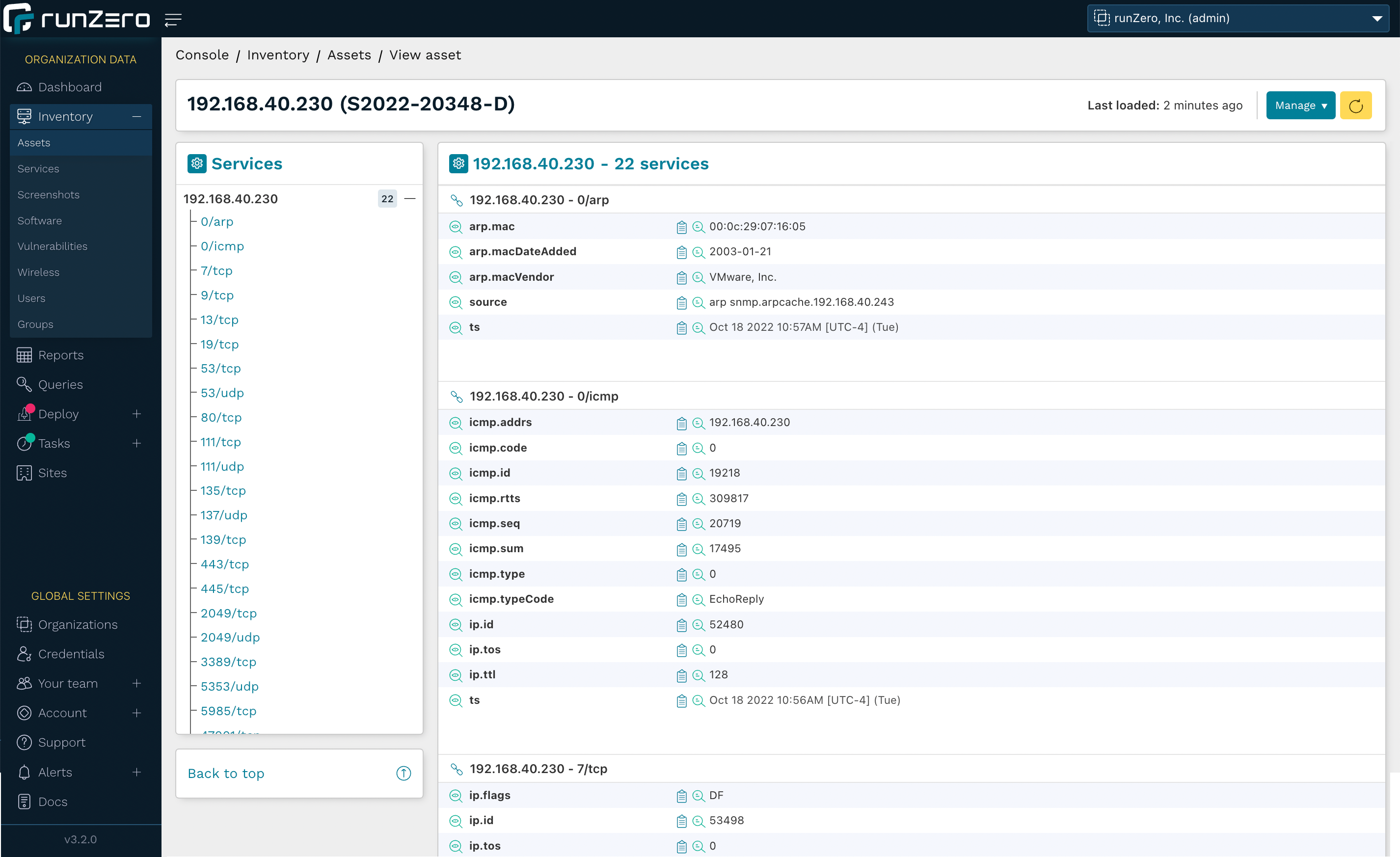 The runZero 3.2 release includes a rollup of all the 3.1.x updates, which includes all of the following features, improvements, and updates.

Want to take runZero for a spin?

Sign up today to test out these capabilities free for 21 days.

A 365-degree view of your Microsoft environment

As the scope of corporate networks has been constantly expanding over time, the challenge of maintaining an accurate asset inventory and effectively identifying unmanaged assets has only grown. In addition to on-premise environments, IT and security teams also have to keep …