Two weeks after our Beta 1 release, we are excited to announce the next iteration of the Rumble Network Discovery platform, Beta 2! We are incredibly grateful to all of the folks who tried out Beta 1 and provided feedback about their experience. Feedback came from all corners of world and from users working across a range of industries and roles. Thank you!

If you would like to join the Beta process, registration is open.

The Beta 2 release is a roll-up of improvements to the user interface, agent, scan engine, fingerprinting system, and overall performance. The user interface is still far from perfect, but an effort was made to reclaim screen real estate for what matters most; your network assets. 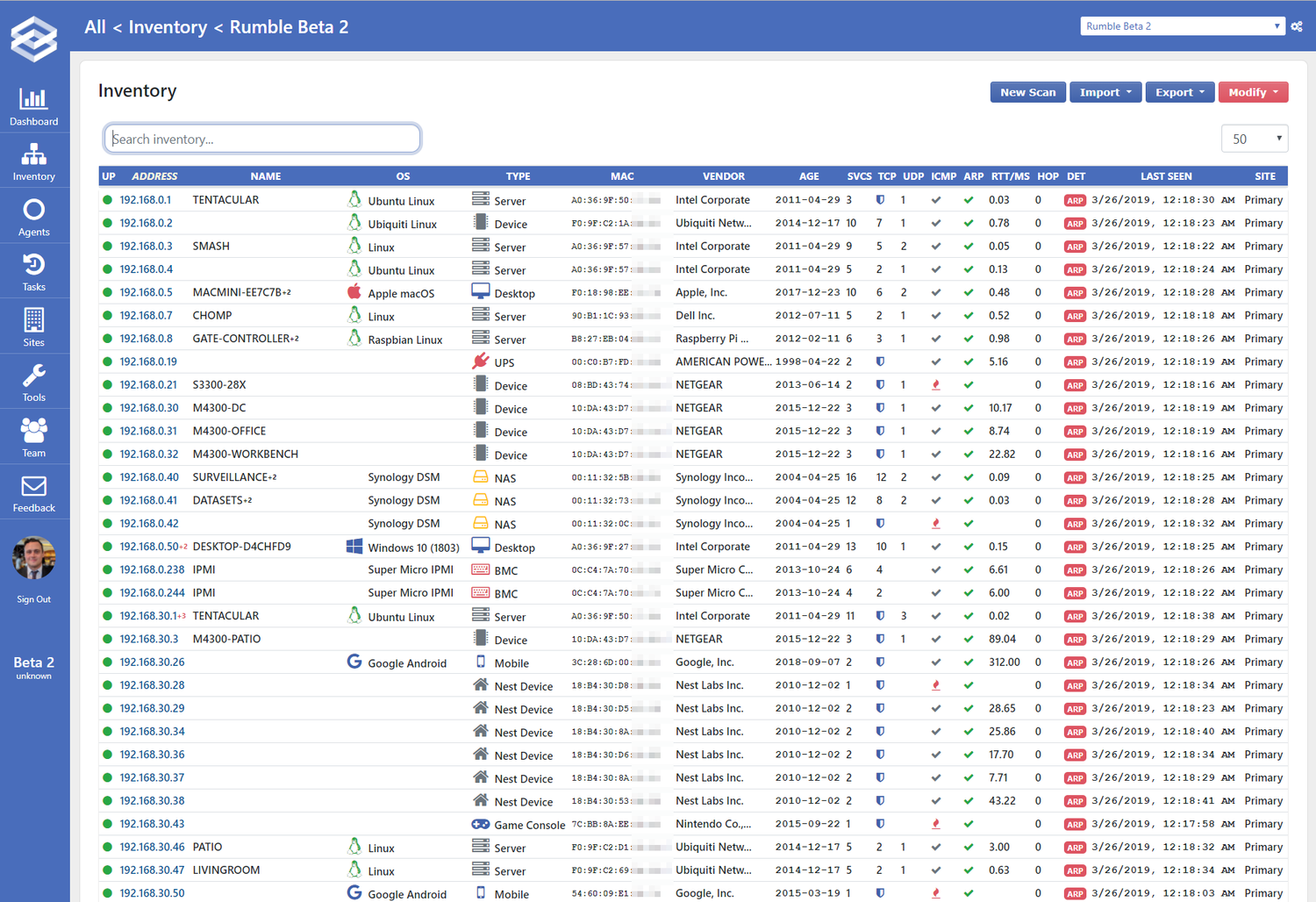 The number one request from our Beta 1 users was the ability to setup automatic scans, occurring at a specific time and frequency. Beta 2 now offers scheduling options from the Scan Configuration dialog. Scheduled and recurring tasks are also shown on the Tasks page, where they can easily be cancelled as needed. 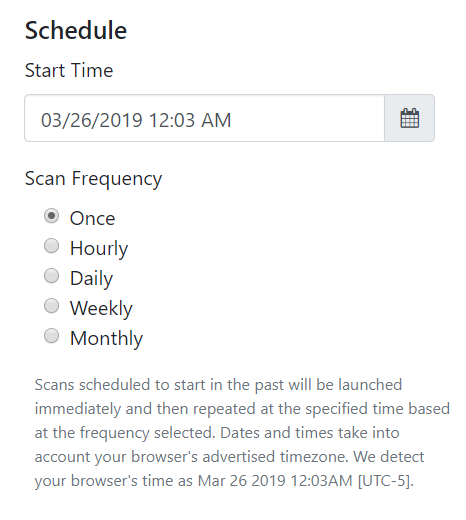 The second most frequent request was the ability to set advanced scan options for Agent-launched scans. This includes access to all of the command-line options available from the Scanner, along with some new options, like the ability to set Scan Exclusions. 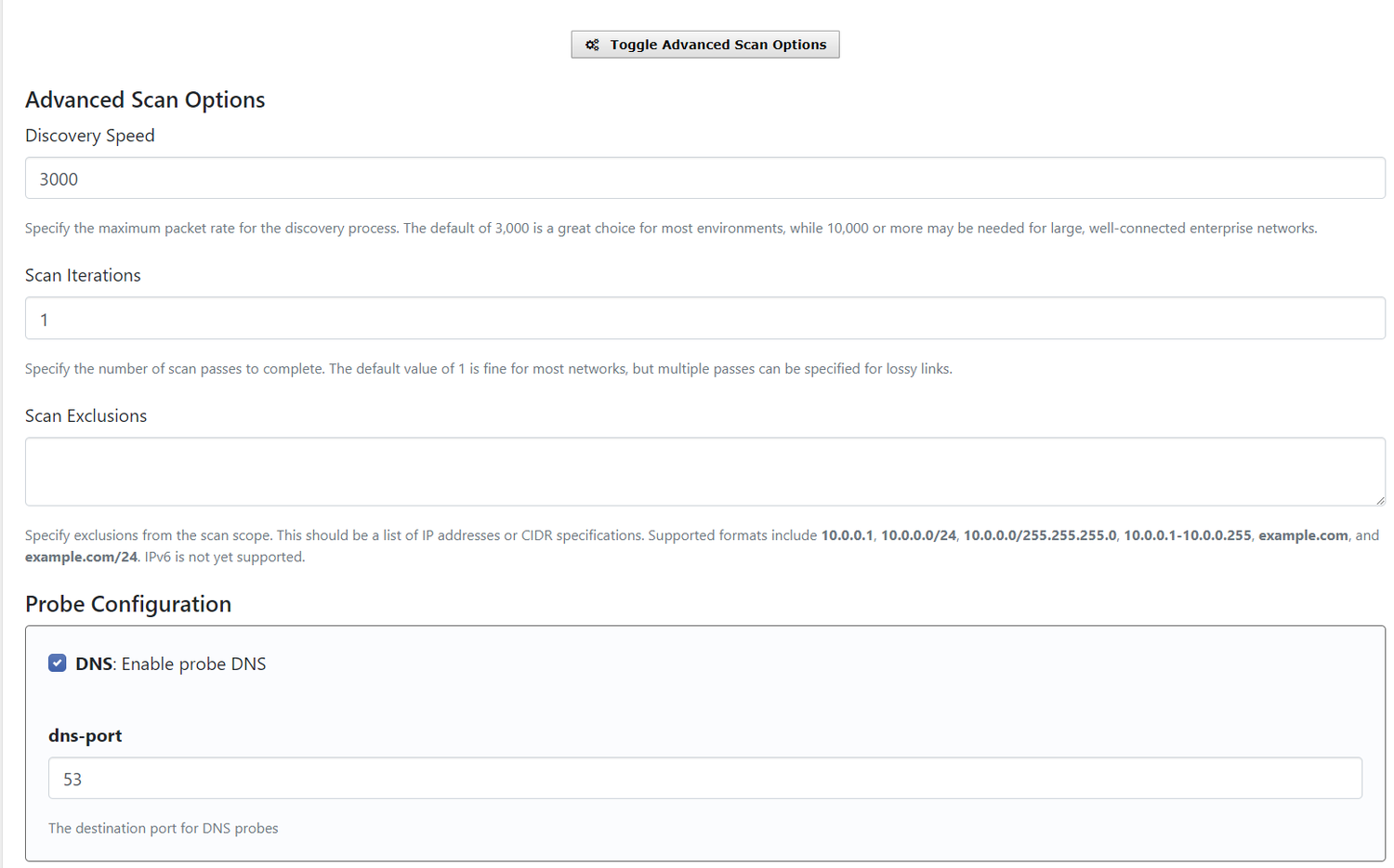 The Inventory view now provides two new columns, Up and Last Seen. Rumble now keeps an eye on which systems have gone offline since the last scan and when they were last identified. 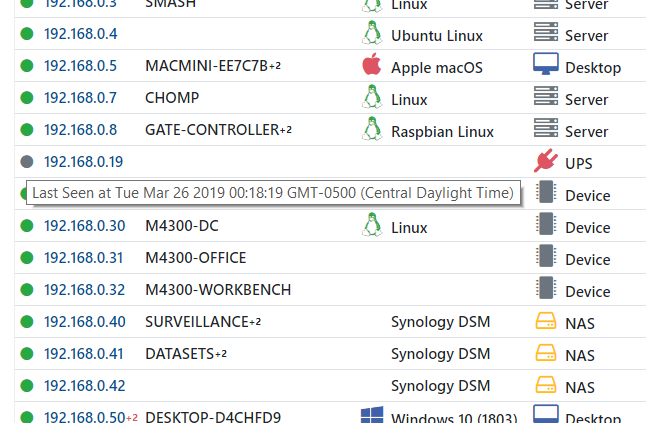 Quite a few Beta 1 users were interested in bringing Rumble data into other systems they use and asked for a painless way to do so. Starting with Beta 2, Rumble provides a read-only Export API that can configured from the Export menu in the Inventory view. The CSV export has also been reworked to simplify columns and prevent large scans from breaking Excel imports. 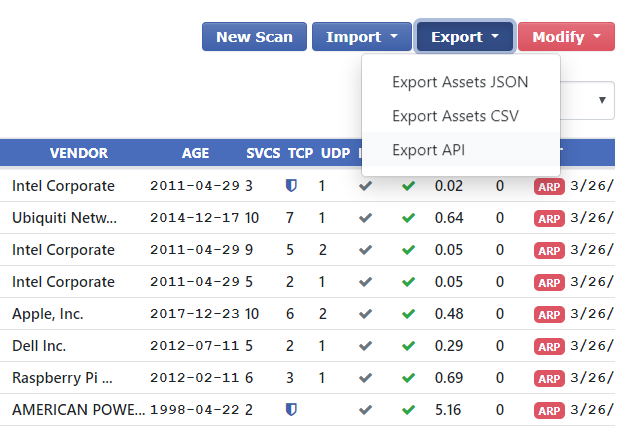 Performance is a big deal when it comes to creating an inventory of large networks. Beta 2 now easily chews through 100,000+ host scans, classifying hosts through a bevy of new fingerprinting techniques, and making them fast to search through an improved user interface and search backend. The Inventory search now supports querying systems by service protocol (“http”) and service product (“apache”). 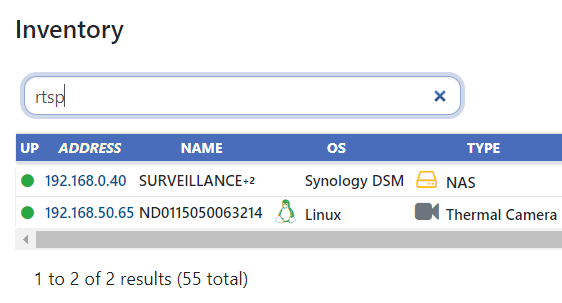 The features above are just a small part of our plans for the Rumble Network Discovery platform. If this looks useful for your environment, please give Beta 2 a shot and let us know what you think.

Rumble Network Discovery is now runZero! The Rumble Beta program is winding down after an incredible six months. Rumble now tracks over 1.8 million assets, runs approximately 1,500 scans a day, and has been accessed by almost 2,000 users. We are ridiculously grateful to the …

Rumble Network Discovery is now runZero! Rumble Two Ways with Beta 5 The last few months have been incredible thanks to our wonderful beta community and their vocal feedback. Quite a few folks asked for a version of Rumble they could use independent of the cloud and Beta 5 …